Tuesday evening I was out in Kensington Market having some delicious ice cream with my dear friend Nicole.

I randomly checked my phone and noticed I had just missed a phone call from one of my roommates.  I remember thinking, “Oh god, he lost the dog.”  So I quickly called him and low and behold… Fonzy had run away.  I froze.  I didn’t know what to think except that I needed to get home.  Nicole was being amazing and drove me there as I sat in the passenger seat with my hand over my mouth.  Everything was rushing through my head.  What if he was stolen?  What if he got hit by a car?  The roads near my house are very busy at that time of day and all I could think was him becoming extremely fearful and panicking which would result in him running across the street.

After this point everything became a giant mush that lasted for the next 12 hours.  All I could do was walk and wander and just ask strangers if they had seen a little dog.  I was unable to put together sentences so Nicole made all necessary calls to the police and animal hospitals.  My stomach was churning and I had to go back to my front porch to sit and try to muster thoughts.  I called my parents but I sobbed through that call so I tried to stick to texts and messages only. I had a search team of amazing people out walking the streets and searching past the train tracks in my area, so I decided it was okay for me to stay put.

Between bouts of exasperation and tears I fumbled through my phone to text people and ultimately to Twitter and Facebook where I proceeded to post photos and Caps Lock messages stating that my dog had gone missing.  I attached the hashtag #FindFonzy.

That’s what everything snowballed. I was personally retweeted over a hundred times and my post was shared on Facebook over a hundred times.  And that was only my own personal shares.  The retweets and shares of other people continued and I was getting positive messages left, right and center.  People I didn’t know who lived in the area were out on their bikes taking a look around.  Other people were messaging saying they had been stopped by my search team and asked about Fonzy.

Slowly throughout the night my search team dwindled as it was too dark to continue looking.  We did manage to find many rabbits, raccoons and angry cats.  I found myself alone around 1:30am.  I decided to go out on my own for a little while since it was quiet.  I remember walking through alleys and saying his name wondering if he would hear me and come running or if he would stay hidden because of fear.  I was wondering if he was still roaming and looking for me, because that’s why he went missing in the first place – he was looking for me.   I could picture him in my head wandering up the train tracks like the littlest hobo.  I had great fears of him being terrified in a bush somewhere.

I put his bed on my porch with his water dish and pulled myself inside at 3:30am for a couple of hours of shut eye.

I set my alarm for 6:30am so I could get back out walking around.  I had a hard time getting myself up.  I checked Twitter, Facebook and Instagram and #FindFonzy had exploded through the internet.  I was getting so much love and so much help.  People had made their own posters for Fonzy and sent them through the twisted tubes of the internets. I felt so warm.  I was ecstatic at how many people already knew who Fonzy was and knew how badly I needed him back.  He has been my best friend for 7 years and has traveled far and wide with me.

Then I got that call.

It was 7:50am and my phone rang with an unknown number.  I normally don’t answer those but since my number had now been plastered all over the internet (with no cares about what psychopaths may get it) I had to.  You never know.  This girl named Alyssa said that she had been tweeting at me in the night about how her friend Caitlin had Fonzy.  Alyssa said she had been, unfortunately, in the hospital waiting and was scouring Twitter and came across the retweet of the poster that had been made for #FindFonzy. I couldn’t see her tweets because they were protected.  She said her friend had texted her photos of this cute little dog that showed up at… an art show.  An art show!  Can you believe that? The location was a good 30-40 minute walk away from my front door.  She gave me her friend’s number and I proceeded to blow up her phone.

It turns out Fonzy had wandered north from my location of Dupont and Dovercourt and ended up near St. Clair and Christie in a park called Wychwood.  He more specifically ended up at the artspace called Wychwood Barns.  There was an art show going on there and he became attracted to a group of girls.  He is a ladies man.  They made him feel comfortable and he hung out with them for the evening. They even gave him the name, Rodney Stewart. She spoke about the night being very spiritual for her and it pushed her to Fonzy. Normally I would just brush off those types of stories but given the way the night had gone I found it quite moving.  Caitlin couldn’t just leave him out all night so she stepped forward to take him to her place until morning when she would call shelters and find out where he came from. Then I called and woke her up.

It is amazing to think that all evening people had their heads staring at their little screens and that is what eventually found Fonzy.  This does not take away the foot power that I had looking up and down the streets. That aided is knowing that he wasn’t dead in the streets and was possibly in a warm place.

I couldn’t have done it without all of you, a real community of real people. 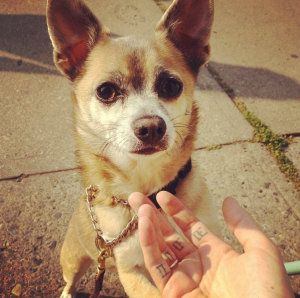 I am Candace, a freelance visual artist who dabbles in several mediums and is sometimes distracted by brunch, cupcakes and chihuahuas.